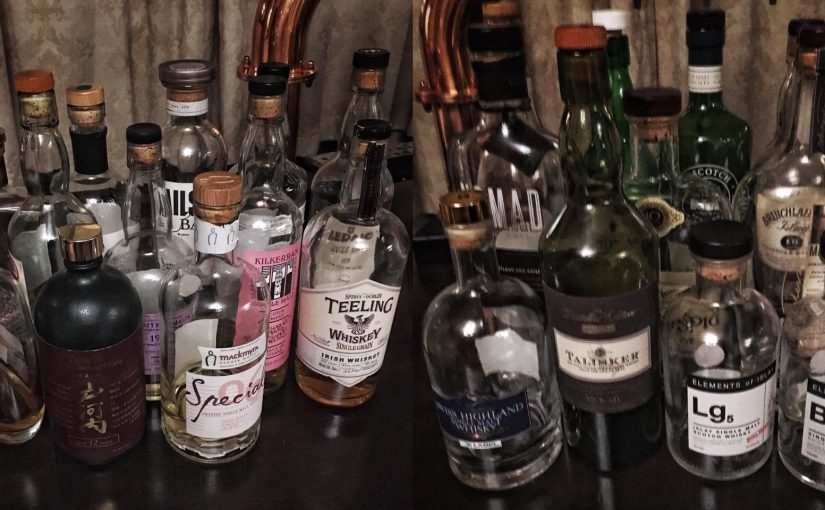 A quick update on our November charity tasting – it was a huge success. Many thanks to all who came.

In the end, we had about 35 whiskies on the table to taste, from single cask SMWS bottlings and distillery exclusive releases to hard to find treats and strange things from overseas.

All of the money from the tickets (after PayPal fees were taken off and a bit of cash from the coffers was kicked in to make it a round number) has gone out to our November charities of choice – a total of £600!

The first beneficiaries are our brave Movemberers – squad regulars who are growing ill-advised moustaches during November to raise money for men’s health charities. Well done Mitesh and Phil – if you want to donate to them yourself, click on the links below. Be warned, Phil’s page includes daily pictures, which is harrowing:

Next is Ben Bowers, the king of A Dram A Day. At the time of writing, he’s up to 302 whisky reviews, posted on a daily basis since Burns Night, and is about a third of the way to his £5000 target for the Children’s Heart Surgery Fund. Here’s Ben explaining it:

You can donate to Ben here.

Fourth is the chosen charity of our venue, The King & Queen. We’ve been using their room for the past few years and all they ask is that we donate to Macmillan Cancer Support – donate we have. A top cause and an excellent pub.

Fifth is Elise, Squad leader extraordinaire, organiser of things and occasional runner. While she didn’t make the New York Marathon earlier this month due to being stuck in the UK, there are many more runs to do and when she next passes the finishing a donation to her supported charity will follow. More details to come…

Thanks again to everyone who helped us raise the cash and also, in doing so, helped finish up some of the whisky that has been filling my flat.

Tickets for our Christmas extravaganza, which will be raising money for Shelter, will be announced very shortly, so if you’re not a member of our mailing list, we recommend you sign up now.