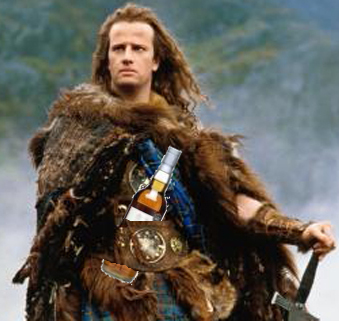 The time has come to turn our attention to the whisky region described as “Highlands”.  Covering every mainland distillery north of Glasgow (outside of the Speyside cluster), surely the region’s too massive to have any unifying characteristic?

To lead us through some fine selections from the Highlands in the pursuit of an answer to this thorny question, we are once again privileged to have the expertise and calming demeanour of Mr Rob Whitehead.

To make your reservation, please use the Whisky Squad #15 booking form.

The date for this session is Thursday May 5th, and will take place in the upstairs room at The Gunmakers.  £15 per head, payable in advance.

I’ve had a surprising number of enquiries about the recipe for the Whisky Squad Birthday Cake, so it would be foolish not to share it.  Because essentially, I found it on t’internet in the first place.

It’s more or less an adaptation of “Whiskey-Soaked Dark Chocolate Bundt Cake” from “In The Kitchen With A Good Appetite”, by Melissa Clark. (although she used bourbon, which I think’s an entirely different proposition) 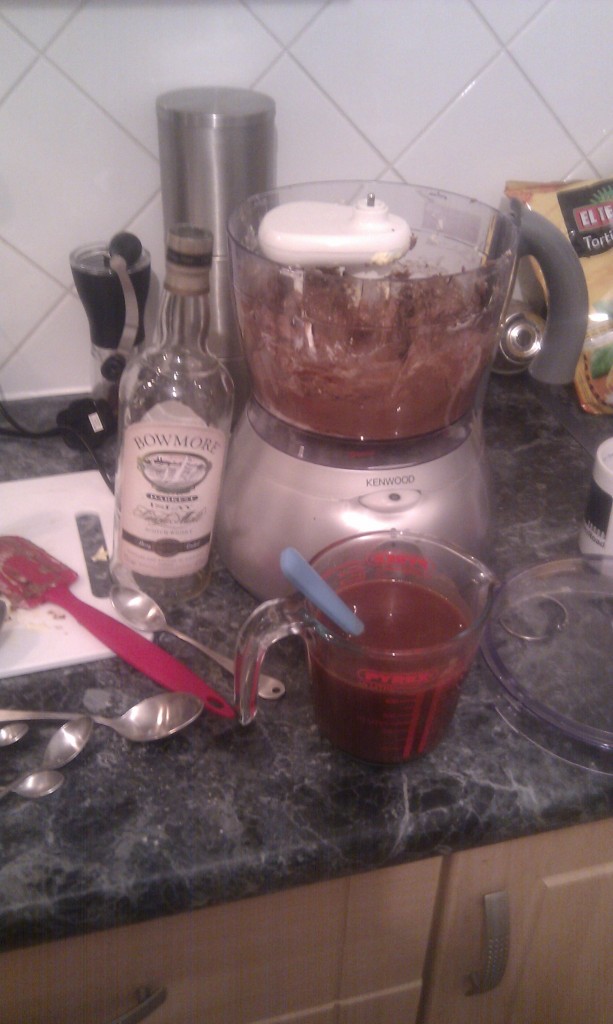 The arcane sequence of events 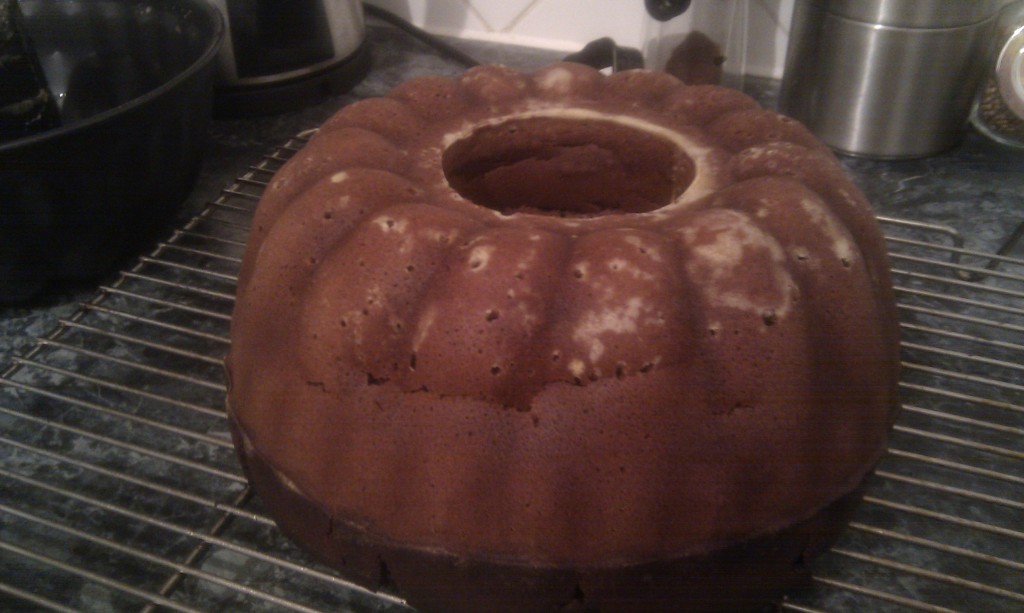 I made a practice cake before the real birthday cake, and as these things usually go, the practice one turned out slightly better than the real thing (although everyone present seemed to think the actual cake was made of pure awesome).  I suspect my quantities for the 2nd cake erred toward slightly less liquid and slightly more flour, and as a consequence was nowhere near as rich or moist as the test cake (which was – did I mention – bloody staggeringly nice?).

It also appears that the choice of whisky you use doesn’t appear to make a vast amount of difference: Test Cake had Glenturret 10yo in it, and Proper Cake had the rest of my bottle of Bowmore Darkest (old release).  So in hindsight it probably would have proved a useful application for the bottle of Famous Grouse I was recently bequeathed. 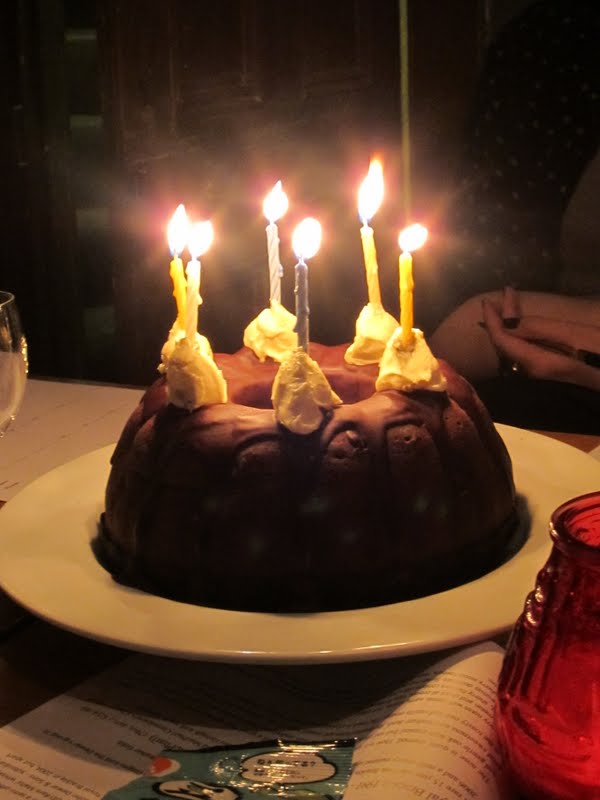 Who would’ve thought that when we first crammed a group of forward-thinking whisky enthusiasts into the tiny room at The Gunmakers that we’d all still be looking forward to repeating this ritual monthly a year later…  But here we are, and the Squad is going strong!

Thanks to each and every person who’s come to one of our sessions (by our calculations, we’ve enhanced the whisky knowledge of about 55 distinct humans this year) for your involvement and enthusiasm.  And of course to our pool of amazingly knowledgeable whisky experts, who guide us through each session/theme.

(Yep – at Whisky Squad’s Birthday session we had cake.  And it were nice.)

2 more events for you to know about, if you’re enthusiasts of whisky and live in the London area:

Albannach is a great whisky bar on Trafalgar Square, and on the 29th of March they’re running a whisky tasting expressly aimed at women.  Guest speaker for the event will be Penderyn distillery’s very own Gillian McDonald.  Further info and ticket booking contact can be found on the PDF on the Albannach site.

We’ve previously rhapsodised about how amazing the 2010 Whisky Show was, and the 2011 show is shaping up to be every bit as good!  We’d previously talked about the show being in late October, however an organisational reshuffle sees it moving to Friday 7th and Saturday 8th.  The venue this year will be Vinopolis, the wine & spirit museum complex near Borough Markets.  Tickets are available for Friday, Saturday, or if you’re feeling saucy, both – booking and other info on their website.   It’s £95 per day, however as an event geared towards enthusiasts it represents excellent value for money, and a chance to try many rare and exciting whiskies.

Though our main interest here at Whisky Squad HQ is to ensure that everyone wants to come to our monthly tasting events, there’s also other stuff going on out there which we thought you might be interested in, so…

As mentioned in passing at previous Whisky Squad sessions, at the end of October a big whisky event was held in London called The Whisky Show.

A couple of our number were lucky/motivated enough to go – Darren The Whisky Guy stuck his head in on Saturday afternoon, Billy popped along on the Friday, and I (i.e. Jason) convinced my girlfriend to come along on the Saturday.  We ran into our previous guest Colin Dunn there presenting a whisky & chocolate tasting session, as well as meeting up with Doug McIvor from Berry Brothers & Rudd – the chap who assembled the excellent selection of drams we had at Whisky Squad 7.

It was a thoroughly excellent day, with a cornucopia of whisky tasting opportunities available, and the chief reason I bring it up now is that I’ve just written a fairly comprehensive blog post about it, should you be curious to learn more.

In summary though, £95 for a ticket to an event that allowed me to taste 36 whiskies (more than half of which retailed for over £100 a bottle), a selection of artisan chocolates, enjoy a brilliant 2-course meal, and rub shoulders with a buzzing crowd of whisky enthusiasts is definitely a worthwhile use of fundage.

As luck would have it, Andy knocked out a blog post about it mere days later over on Good Drinks Etc.

And, as if that weren’t enough to go by, Billy’s Booze Blog now also contains a selection of ordered words which relate to the wondrous stuff wot we was drinking that night.

If you get sick of reading about all the fun we have, you’ll just have to try to get to Whisky Squad #7 – to be announced shortly…  stay tuned!

(n.b. Nothing was turned into macaroni.  I don’t really know why I wrote that.)

PS It looks like Darren The Whisky Guy has also had a go at capturing the information of session 6, albeit this time in a far more factual manner than usual.

Whisky Squad #6 – BRILLIANT BLENDS – is now 100% booked up, so commiserations if you missed out this time…

However, all hope’s not lost: keep a space in your diary for Whisky Squad #7!  The date will be Thursday October 7th 2010, and the details will be announced here at whiskysquad.com shortly.

Can you really believe that Whisky Squad’s reached the midway point between not being in existence, and being a year old? That’s right… it’s session number 6 already! Our “anni-half-sery”!

Whisky Squad #6 will take place on Thursday September 9th at 7:30pm at The Gunmakers pub in Clerkenwell (London’s finest and most convivial ale house).  The theme for this month is:

You bet your [valuable things] we did!  Single malt enthusiasts the world over seek the wide-ranging flavour options of each distinctive region and distillery… so surely there can’t be any blended whiskies that will interest us will there?  WILL THERE?  And just what’s meant by a blend, anyway?  Come along to Whisky Squad #6, and all will become clear*….

Bookings now open on the form you’ll see when you click on this link.

£15 per head in advance, first come – first served.  We’d like to be able to open each session up to more people, but it’s a fairly cosy environment as-is.  Hopefully you’ll be lucky enough to score a spot.  Or, put a circle around October 7th in your diary and keep an eye on the goings on here at www.whiskysquad.com !

(* at least as clear as usual)

“Whiskies for Summer” came and went, and our man Billy has already coalesced the vapours of recollection into a disturbingly accurate report of what happened that fateful night in Whisky Squad HQ.  Special thanks to our whisky expert & spiritual guide for the evening, Mr Colin Dunn – a man who knows so much about whisky he can tell you which one’s best for breakfast, and which ones make for a good aftershave!

In fact, through the magic of Darren The Whisky Guy’s multimedia production skills, here’s a video of Colin telling us about the Dalwhinnie Distiller’s Edition:

Makes me wish I had some here with me now…