We’re now homing in on December, so to finish the Whisky Squad programme off for 2014 we’ve got a now traditional fixture, and something quite new, different, shiny and wondrous!

Whisky Squad #99: The Department of Whisky and Coffee Affairs

Coffee is a fine, fine thing – and to introduce us to a bit of coffee info we’re incredibly lucky to have snagged the attention of London coffee impresario Tim Ridley, who’ll be co-presenting a session with Billy, at the TATE BRITAIN!

Rounding out the year, our now traditional and very popular Whisky Surprise session (but then, aren’t they all?) – where entry is an optional £5 donation, and you bring along a whisky you’d like to share with the Squad.  Never to be missed!

Spring forward, fall back – the latter is where we are. Change your clocks now! Unless all of your clocks are clever. Like mine aren’t.

Anyways, along with that public service announcement, here’s something much more interesting – two new Whisky Squads are open for booking. That’s right – open for booking now! Get clicking…

Whisky Squad #98: Managing Production Variables in a Controlled Environment in the Absence of Sight

Michael “The Big V” Vachon of Maverick Drinks is joining us for our first November squad, with some of the tasty whiskies from his stable of tasty things in his bag. We’ll be looking at the various things that go into making whisky taste how it does, although we’ll be doing it blind, so not really looking.

We like Milroy’s and fortunately they also like us. We’ll be descending into the tasting rooms hidden underneath their iconic Soho shop for a selection of tasty whiskies from their shelves upstairs.

…and that’s it until next month. Enjoy your extra hour in bed. Unless you’ve got out up already, in which case, I hope it was nice.

The Whisky Squad gang have been a bit busy for the last few weeks, but October’s sessions are now almost here and will be open to book in mere day(s)! A return from an old friend and an adventure at a new venue could be yours! Exclamation marks!

Bookings for Whisky Squads #95 and #96 will open at 1pm on Tuesday 23 September.

Rob Whitehead — Berry Brothers & Rudd spirits god, friend to small animals and occasional Whisky Squad inmate — returns for another Squad session. He’ll be bringing tasty whiskies and an even tastier ability with the English language. He talks pretty, like.

Whisky Squad #96 – They can’t all be doing it wrong

Most of the world drinks whisky mixed, so why don’t we? While Whisky Squadlateers are obviously amongst some of the most excellent and refined people in the world, we should probably make sure we’re not missing out. Squad-master Jason B Standing has scoured the whisky mixing bible, Dave Broom’s Whisky: The Manual, and come up with a few ideas of his own, all of which will be shared at Bistrot Bruno Loubet in Clerkenwell, a rather shiny new venue for us.

By “all new”, we mean that the whisk(e)y we have lined up for the ENTIRE MONTH is whisky that’s entirely new to us here at Whisky Squad!  We’ve only ever tasted one whisky from the Teeling Whiskey Company (so far), and the second September session speaks for itself.

Authentic Irishman and Brand Ambassador (and general all-round top chap) Sam MacDonald shows us some of the exciting stuff that the Teeling Whiskey Company are up to.  Not to be missed!

Whisky Squad #94 – Off The Beaten Track

It’s not that we’re obsessed with statistics, or the past – but it struck us as somewhat difficult to believe that after more than 90 whisky tastings we *still* haven’t had one whisky from every distillery in Scotland!  In this session we aim to try to nudge a bit closer to that claim, sampling 6 that have somehow not yet made it into our impressive tally.

Just thought we’d share a picture of the rather attractive bottle lineup from last night’s Bruichladdich-centric tasting session, led by Billy and Jason.

If you’d like to know more about these whiskies, or indeed any of the other tastings we’ve done since we started Whisky Squad, it’s all in the Drams So Far archive.

And if you’re keen to see a list of all the Bruichladdichs we’ve tasted in total (and which sessions we tasted ’em in), we’ve got that too!

In fact, last night’s session rockets Bruichladdich into the lead, as distillery we’ve tasted the most whisky from!

Two marvellous new sessions for the Eighth Month of the Year Two Thousand and Fourteen – we thought that we’d keep things fairly light and summery, but still with the depth & interest that Whisky Squad are WORLD FAMOUS for.

Whisky Squad #91: Bruichladdich, Now and Then

It’s time to turn our gaze on a single distillery, and this one’s a corker. Producing a range of spirits with very distinct and wide ranging character, we’re taking a close look at the highly distinctive Islay enigma, Bruichladdich.

Summertime, and the livin’ is easy (or so they say). Some might say that whisky is more a winter drink than a summer one (who says that? let’s get ’em) but what if we proposed that whiskies have seasonal characteristics? Here’s to whiskies that are imbued with the taste of summer.

Bookings for both of these will open at 11am on Thursday July 17th – don’t miss out!

June has almost passed, and with it two excellent new Whisky Squad themes. If you missed the Mini Whisky Dinner, bad luck. If you haven’t yet grabbed a ticket to our very first Canadian Whisky Tasting on the 19th June, head on over to the event page and snap up one of the last few tickets.

In July we have decided to revisit two perennial favourite session themes: we kick off the month with a peat-fest in St James, followed up with a visit to the Scotch Malt Whisky Society in Farringdon. Don’t worry, there will be plenty of cracking new drams to taste! Here’s the skinny on the sessions:

Whisky Squad #89 – Bringing Back The Smokestack

It’s been a good long while since we’ve dedicated a whole session to those tasty peaty drams, so Joel is setting out to rectify this ASAP. There have been a whole raft of new smoky whiskies released recently, and not all of them from distilleries you might expect. Peat freaks – get in quick for this one!

It’s time for a trip back to our favourite Whisky Society in Farringdon for some science. Very rough science that is. SMWS Ambassador, John McCheyne, will pair up mystery drams from the same distillery to see if we can uncover some whisky DNA.

Bookings for these two sessions open at 1pm on Friday, 20th June.

For June we’ve got not one but two guest tastings, which is wonderful news!  Both will be quite radical departures from our last few sessions (other than in the sense that they’ll come with a load of sensory stimulation and provide much to broaden our palates, minds and experiences).

Squad regulars Kirsty and Elise match and contrast a range of whiskies with a selection of nibbles & foodstuffs that they’ve picked out, or more accurately, made. Having tasted both Elise and Kirsty’s cooking in the past, this is a sure-fire winner of an evening no matter what else happens!

Elise goes on to play a blinding double…  Sure we’ve looked at “American Whiskey” in previous sessions, but the USA’s northerly neighbour has almost completely been left out of our lineups.  Until now.  Canadian Whiskey’s a rich topic area, and who better to guide us in than our very own Canadian Whiskey Enthusiast.

I mean, she’s a whiskey enthusiast, and Canadian.  But also an enthusiast of Canadian Whiskey.

Yep, I’m pretty sure you got that.

Bookings for these 2 sessions open at 7pm on Tuesday May 20th.

Continuing Whisky Squad’s extravaganza of sensory experience & whisky education, we’re proud to announce our two tasting sessions for the Merrie Month of May!

The characteristics of whisky casks are as diverse as fingerprints, and in this session Billy Abbott and Jason B. Standing will be looking at a selection of whiskies chosen by a cornucopia of different Independent Bottlers. What it they’re looking for? Each has access to different casks and has their own personality and views, so all up it makes for a fascinating alternate view of the whisky landscape!

Simultaneously the main makeup of whisky sales in the world, and also often eschewed by people as the poor cousin of Single Malts: there’s a great deal more to blended whiskies than you might assume. Jason B. Standing intends to take the group through some blends which might change the way you think about this part of the market, or if not, at least you’ll get to try some interesting whiskies.

The May sessions open for booking at noon on Friday April 18th.

Last night’s tasting session marked off the 4th Birthday of the Whisky Squad – from those humble beginnings, we’re… well, still in humble surroundings, but we’ve put together 84 tastings so far and it’s been an absolute blast.  We hope to continue putting together & running fun tastings for years yet to come, but we wanted to say thanks to you all for making it happen. 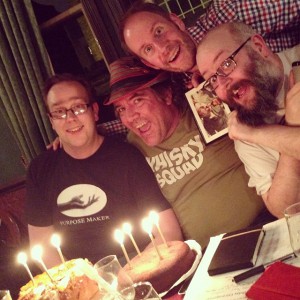 It wouldn’t be a party without a cake, and Kirsty did a brilliant job with a couple of Squad birthday cakes (we may even coax her to share the recipes…), and Pooja snapped a picture of said cakes before we all crammed them into our eager face-holes.

The tasting was the “3 way jerk-off” format, where the 3 of us present 2 whiskies each to the group and there’s a vote on favourites at the end.  As Joel couldn’t make it in person (although was represented in the small shrine we built on the table), long-time Squadder Dave Haste stepped in for his presentational debut and did a mighty fine job, selecting 2 very popular whiskies…  although not quite popular enough to topple Jason’s selection of the champion of the evening – the Bowmore Devil’s Casks 10yo.  What a stonkingly yummy way to celebrate a birthday!

Well done, all.  And here’s to what the future brings for Whisky Squad!

(it’s not entirely clear how Tim managed to creep into this photo, but it’s always nice to have him along also – as he put it himself, “Those 3 look like they’ve just won the Euromilions… I look like I’ve just won a tenner on a scratchcard”.)