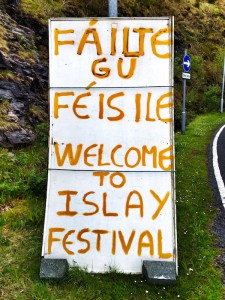 This year’s Feis Ile – The Islay Festival of Malt and Music – has been one of some note. It was:

While we don’t expect Jim to really disappear from the scene – he does live next to the distillery, after all – there was a definite party atmosphere on the island this year. And who would know better than Billy, Whisky Squad minion and recent soujourner on the fabled whisky isle itself.

Billy didn’t spend all of this time on Islay drinking, and picked us up some interesting treats, which he will be showing off at June’s second Whisky Squad tasting. Five drams from the four celebrating distilleries, all excellent.

There will be more than a little smokiness involved, so be warned.