For September’s first session we will be welcoming William Wemyss to the Gunmakers. He is the head-honcho at Wemyss Malts, currently one of the hottest independent bottlers in the industry. William will bring with him a selection of their award winning blended malts and single cask whiskies. 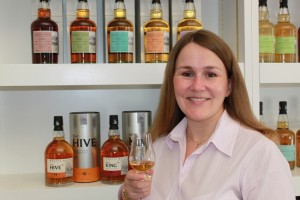 UPDATE: William is unfortunately unable to make it on Thursday, so instead we have Karen Stewart coming down instead.  Having previously worked with Ardbeg and Glenmorangie and in the beer industry prior to taking on the role of PR & Marketing Manager at Wemyss Malts, Karen will share her passion for whisky as she introduces us to this fascinating range and tell us about the Wemyss approach.

The Wemyss has links to the whisky industry running back to the 19th Century, when John Haig of Haig’s built his first distillery on Wemyss family land. More recently they have built a portfolio of wine brands, but now the focus is squarely on whisky, the spiritual drink of their homeland.

The key to quality for Wemyss Malts is careful cask selection, and for this task they have enlisted the services of none other than renowned Scotch Whisky expert Charlie Maclean. He heads up the Wemyss Nosing Panel, assessing cask samples, rejecting most, but keeping only the best for their whiskies.

The whisky is bottled at a minimum of 43% alcohol, without any colouring. Occasionally they will reveal which distillery the whisky came from, but the best indicator of flavour are the deliciously evocative names given to the whisky, such as Red Berry Cream, Fresh Fruit Sorbet and Spice King. They are enough to get you salivating before even opening the bottle!

I could also mention that The Hive won Best Blended Scotch at the World Whisky Awards 2012, and the other bottlings have also pick up a whole swag of awards and medals, but surely you don’t need any more convincing that this will be a tastily fantastic Whisky Squad. You had better get in quick for this one!