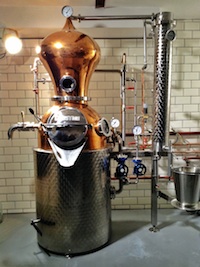 The session title has a simple answer – the original Whisky Squad whisky Gandalf and teller of inappropriate stories, Darren Rook. Along with head distiller Andrew Macleod Smith and a select group of crowdsourced backers he has done exactly that and opened The London Distillery Company on the south bank of the Thames between Albert and Battersea bridges.

Now that their stills have arrived the distillery is ready for visitors and we will be amongst the first, with an Easter weekend excursion to say hello to Darren and the two new ladies in his life – Christina and Matilda, the gin and whisky stills.

Whisky Squad sessions are informal tastings centred around giving people a comfy environment to explore whiskies, and chat with a friendly bunch of similarly interested people.  We get people of all levels of exposure and expertise along, so don’t worry that you know too much/too little.