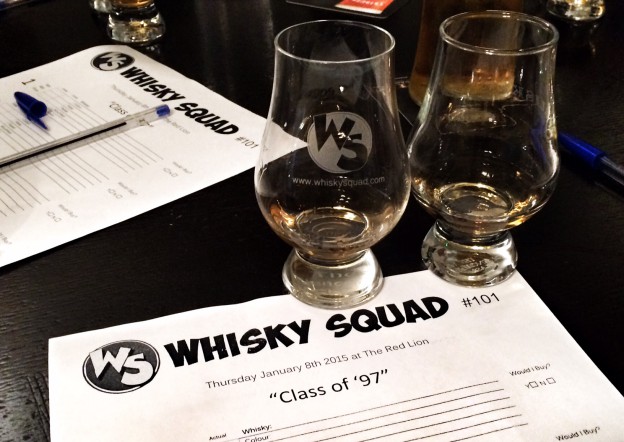 All we knew about the theme for the evening was that Rob was 12 in 1997 and that it was an important year for some reason. It was my first year at university and the year that I discovered a love for whisky, so I’m in full agreement, but Rob kept schtumm as to why it was otherwise notable. We suspected that Katrina and the Waves’ shock win at Eurovision for the UK was not it, despite assurances otherwise.

As usual we tasted the whiskies blind, although Rob did tell us if they were cask strength or Berry’s chosen diluted strength of 46% ABV. However, this time we tasted through all six drams before he revealed what each was. I’ll keep to that here as well, to help you experience the same levels of annoyance and enlightenment that we did…

First up was a dram that had some murmured recognition. It had a toffee laden nose with a sweet-shop underneath (I am obsessed with sweets in my tasting notes, it’s not just an excuse for me to run a Whisky Squad session): pink shrimps, lemon bonbons, gummi fruit, Fruit Salads and a spot of spiced cake mix. That was all joined by musty pine, brown sugar, butter and green leafiness. A touch of water brought out more gummi and a hint of sweet and sticky baked beans. On the palate it was sharp and fruity to start, with sweetness building from underneath. Stewed apples with cinnamon sugar, candied lemon and butter combined to make some spicy apple pie. Water brought out real fruit salad, with peach, plum, apple, and zesty orange notes popping up, along with some herbal notes. It finished quite hot without water, but a drop or two left orchard fruit lingering: apples and pears. The word ‘Clynelish’ was heard around the room.

Before dram number two even hit my end of the table, there was mumbling in the distance that this might be a grain whisky. Zingy and light as it was on the nose, it didn’t seem grainy to me, with lots of citrus up front: tangerines and sweet half-time oranges. Hiding behind that was a hint of something floral – honeysuckle and dry pot pourri – and a bit of dusty oak. The palate was all butter icing to start, with extra powdered icing sugar on top. Lemon sherbet developed, as well as woody spice. As the sweetness started to calm down, greener notes appeared, with tarragon and damp leaves leading to some darker, earthy notes behind. It finished with a green and leafy hint of mint and peppery oak, but stayed the right side of being too dry.

Dram three leapt out of the glass, despite its 46% ABV: sticky toffee pudding, caramel sauce, toffee apples and spicy oak. As it sat, nutty notes developed and the sweetness died down, with vanilla ice cream, hazelnuts and polished oak appearing, and then softening to lightly sweetened butter. It had an impressive journey of a nose, covering quite a lot of ground as the dram got air. On the palate it wasn’t quite as lively as the nose, but had gentle cocoa, lemon drizzle cake, vanilla cream and a touch of Sherbet Fountain sugar. The finish was much heavier than the body, with Cadbury’s Whole Nut, some raisins (but not enough to go the whole hog to being a Cadbury’s Fruit and Nut), with hazelnuts hanging around as the rest disappeared.

Rob warned us before we ventured into our fourth dram: while he liked it rather a lot and had done extensive research to ensure that this was the case, it was one that had divided opinion. From the off it was obvious why, with a nose that started with white wine vinegar, and moved towards an apple-y note via modelling glue, lemon floor cleaner (with a green scrubber) and hints of cheese rind. The palate was totally different, with praline truffle, chocolate sauce and nutmeg balanced by sharp apple. It had some lingering heat, despite being only bottled at 46% ABV, with some cocoa, and tannic notes from apple skin and hazelnuts. A weird dram, with a nose that reminded me of one of my favourite beers – Duchesse de Bourgogne, a room divider of a drink that I enjoy buying as a round: more often than not I get given a lot of beer to finish.

Our fifth dram returned to the more crowd pleasing realm of orchard fruit, with a range of apples on the nose: Golden Delicious, toffee apples and a hint of apple-scented hand soap. It was quite spirity, and along with the apples there was alcoholic spiciness and dusty ferns. On the palate it was much more rounded and sweet than expected, with more sweet apple, apple sauce, vanilla cream, toffee and a touch of ashiness underneath, as well as some tannic oaky touches. The finished continued the growing tannic theme, with apple skins and woody clove.

The final dram was something quite different. Rather than the softer fruit and toffee notes we’d been getting all night, this was a smoky beast. The nose was full of burning ferns, menthol, sticky black liquorice, vulcanised rubber (a bit like black, school plimsolls), fresh emulsion paint, soot, tarmac and neat Ribena. Intense. The palate also didn’t hold back, with gravel, chocolate brownies, liquorice vodka, woody spice – cloves, nutmeg, caraway – green ferns and an underlying earthy smokiness. It hung around on the palate, with spicy clove and aniseed balls joined by Hobnob biscuits and lingering menthol. An eye-waterer that was immediately declared by my end of the table to be a Ledaig. Berry’s are known for having released some amazing Ledaigs in the past few years, and this was up with them.

However, as with all of Rob’s sessions, the fun did not end there. Sat under a pint glass was a very dark dram, awaiting the attention of the room. Rob likes a competition, and the one for the evening was simple: nose and taste the dram under the pint glass, and guess the distillery. The closest person to the correct distillery, in miles, would win a tour of the Berry Brothers and Rudd Shop in St James, occupied by the company since their founding in 1698. If a tie-breaker was needed, it would be done on a guess of cask number, with the mathematically closest taking the prize. 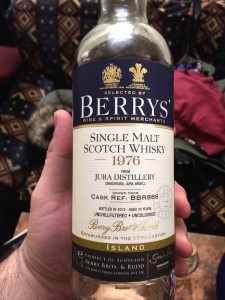 The whisky seemed familiar, with a leathery backbone on the nose matched up with dried bark, dusty earth and grape skin. The palate was sweeter than the nose suggested, with dried apple, plum and blackberry contrasting with warm leather, dusty cupboards, old spirit rancio and damp forest floors after a rainy afternoon. The finish wasn’t all that long, with rich fruit, dusty oak and bitter liquorice pastilles.

While Tobermory distillery led the running for most of the deliberation, in the end a shrewd move by Squad minion Joel took the day, with a choice of Caol Ila – it was obviously not Caol Ila, but the distillery sits close to all of the most likely candidates. The whisky was from just across the water from Caol Ila, having been distilled at Jura in 1976, and at the time of its release in 2012, it was the most expensive whisky that Berry’s had ever released, at £200. Whisky’s got a bit more expensive since then.

Tradition has been fulfilled. The year, and our second century of tastings, has now officially started. Onward.

…and in case you’re too young, too old or just didn’t care back in 1997, here’s Katrina and the Waves, with Love Shine a Light, the last UK entry to win the Eurovision Song Contest.

Many thanks to Rob Whitehead and Berry Brother’s & Rudd for hosting the session, and to the Red Lion in Crown Passage for their upstairs room and tasty beer on tap. You can find full details of the whiskies we tried over on the Drams so Far page.