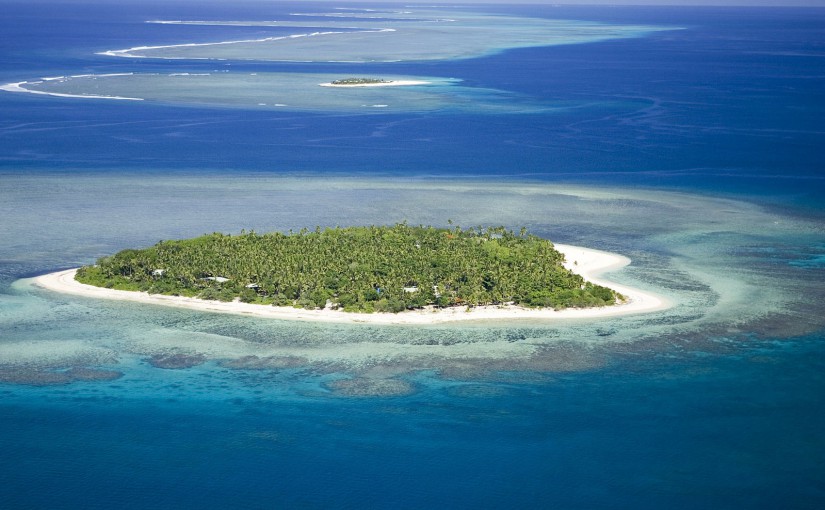 The conceit was simple: whisky from islands. While defining an island is hard – continents are sort-of islands – we kept things fairly traditional, and decided that for the session islands are ‘land surrounded by water’. As usual, everything was tasted blind, and even before the first dram guesses were being made as to where the whiskies were from.

Our first dram began as a bit of a bruiser, with questions as to its strength appearing from a first nose. It was appley and fresh to start, with some darkness and smoke appearing as it sat. It had citrus, spiced apple, sultana sponge cake, warm tarmac and a whiff of smoke on the nose, and a softer palate that led with smoke, soil, charcoal, but was backed up with fruit and gentle spice. Squad-veteran Dave(y) Haste decided that a prediction of Orkney, and Scapa in particular, would be a safe bet for at least one dram of the evening, and he was partly right in this case: it was the Six Isles Blend. 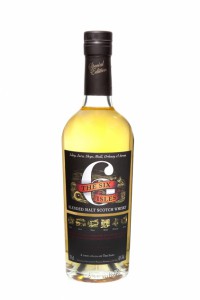 Six Isles is a blend of malt whiskies from the six major whisky producing islands of Scotland: Islay, Jura, Mull, Orkney, Skye and Arran. With that knowledge to hand, it made sense: a blend of smoke, fruit and darker notes, but well-balanced, with the character of no particular island dominating the rest.

Dram number two’s nose had the most unanimous note I’ve ever seen at a tasting: apples. The nose was a combination of crisp Golden Delicious, sharp Granny Smith, apple chews, cheap apple juice, Haribo apple rings and Woodpecker cider. As it sat, some non-appley notes appeared, fruity and sweet – ‘like the peach bits in a peach yoghurt, but without the yoghurt’, my notes say. On the palate the apple was more subdued, with coconut mushrooms (Google it), polished oak and soft brown sugar. The apple didn’t disappear, and appeared in the form of spiced baked apples, with a touch of toffee apple sweetness. It finished with lots of spice: black pepper and hot cinnamon.

Guessing the origin of this through up suggestions from around the world, although Mr Haste was the least accurate with his assertion that it was ‘not from Scapa’. It was from Scapa – the Scapa 16 Year Old. Long seen as Orkney’s other distillery, eclipsed by Highland Park, owners Chivas Brothers have recently started putting a bit of effort into promoting the whisky, and have even pulled down the famed ‘No Visitors’ sign from in front of the distillery, recently opening a visitors centre .

Whisky three was much weightier than the first two, with a sweet barley sugar nose, backed up by spiced fruit cake, apricot jam, buttery marzipan, floral touches and sweet oak. My notes say ‘Christmas-pudding-infused Coke’, but I think I was probably being obtuse. The palate was slightly thinner than the nose suggested, with lots of cakespice and French toast with maple syrup, as well as a little bit of charcoal bitterness. Squad-organiser Joel ‘The Nose’ Eastman pulled out the two notes of the day, with apricot jam and Soreen malt loaf: bang on. 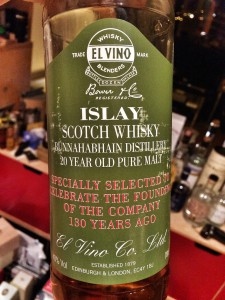 No one got close to this one with the guessing, and it turned out to be a Bunnahabhain 20yo, specially selected to celebrate the 130th birthday of El Vino. They’re a London-based wine merchant who has bottled whisky in the past, although not for a few years. Fortunately they still have stock of this one, as it’s really good despite being dropped to 40% ABV before bottling. It is on sale for the incredibly reasonable price of £39.

The next whisky was one that at first I really didn’t like, but which, as is often the case, I was in the minority about. Joel led off again with ‘banana pancakes’, but to start I just got woody notes: freshly varnished boards and pine resin. It calmed down and sweeter flavours appeared, with maple syrup, salted caramel and ginger cake complimented by black pepper and cinnamon. On the palate it was much drier than I expected, with meaty touches, flamed orange peel, damp oak and lots of spice. It got sweeter, with a syrupy note of Clayton’s Kola Tonic appearing – a bit like Coke without all of the over the top sugariness. Water turned the nose into a woodwork shop, with lots of dust and a slightly burned smell, a bit like having held a piece of wood against a belt sander for too long. The finish was long and sweet, with spiced toffee and creme brulée.

Again, noone got close, although guesses that Elise considered North America an island were surprisingly accurate in style, if not actual origin. It was Tiger Snake, an Australian sour mash whisky – in essence an antipodean bourbon.

I’d brought along the last couple of whiskies and number five was the one I was most looking forward to tasting. It was entirely unlike what I expected, with a light and floral nose that stayed on the right side of becoming soapy: sweet and waxy, with pink shrimps and scented candles. The palate was soft with a sweetshop feel: simple but very tasty. The finish had some darker and more grainy notes, with dark chocolate and hobnobs fading to honeysuckle and violets. 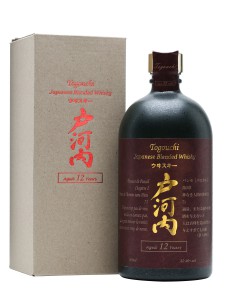 The guesses on this one veered between Japan and Scotland, which is, strangely, true. It was Togouchi 12 Year Old, a blend of Scottish malt and Canadian grain whisky, matured in a former train tunnel, bored into the side of a mountain in Japan. Due to the way that Japanese law defines it, this is a Japanese whisky, despite the spirit coming from elsewhere, but no matter what it says on the label, it’s one to seek out.

For our final dram we went for something sweet and spicy, with a nose of millionaire’s shortbread (although with a stingy amount of caramel), digestive biscuits and milky coffee. The palate was very fruity, but sharp, with lemon, apple and sultanas, joined by cocoa and barrel char. Grain notes flooded in, with flapjacks and rolled oats tempered by hints of custard.

Despite rapidly running out of whisky-producing islands, nobody mentioned the origin of this whiskey, one of the most famous: Ireland. It was Yellow Spot, produced by Irish Distillers at Midleton and finished in Malaga casks to give a sweet toffee note that complimented the traditionally fruity and grain-heavy pot-still character.

Around the world in six drams, hitting most of the major whisky producing islands. There are still a few more on our hitlist to try, from tiny Hven off the coast of Sweden to not-so-tiny Taiwan, but with two sessions a month you can be sure that we’ll return to the islands at some time in the future.

Speaking of sessions, we still have a few tickets left to our second July session: Punter’s Choice. You can learn more and grab a spot over here.